“How do you expect to get us to New York quickly?” I asked Arcon, and then immediately regretted it. I expected another irritated rebuke for wasting his time. There is no way a super-intelligent AI being from the other side of the galaxy would not have a solid plan for the journey. I braced myself for Arcon’s withering response.

Arcon made humming and clicking noises, as if my question amused him. “Well, since I can’t fly or beam, I suppose we’ll have go the old fashioned way. We’ll take your car.

“Let me get this straight. You want me to drive you over a thousand miles to New York City in my ancient Mazda Miata with 120,000 miles already under its belt?

Arcon made crackling sounds. I imagined the noise was his latest way of communicating his impatience to me. “It beats taking the bus, don’t you think?”

“The odds are less than fifty-fifty my car can make the trip without having a coronary thrombosis.”

“Give me an hour alone with it in the garage, and I’ll have her as good as new.”

Shades of the movie “Christine” flickered inside my head. I saw my car reconstituting itself like the 1958 Plymouth Fury did after it was destroyed by a gang of bullies. I remembered the movie’s tagline: “Body by Plymouth–Soul by Satan.” I strongly suspected I was in some kind of elaborate nightmare. Perhaps this was my subconscious proving it.

We were sitting at a chrome and glass table in an alcove of my friend Jeffrey’s ultra modern kitchen. Being a silver sphere about the size of a bizzarely sculpted basketball, Arcon fit right right in with the decor.

I rose abruptly from the table. “Excuse me, I need a beer,” I said to Arcon. I was beginning to crack under the pressure of the situation. If what Arcon had said a few minutes earlier were true, the Earth had less than seventy-two hours before a giant pulsar from a distant supernova fried the planet into a crispy ember. Unless, of course, Arcon and me managed to do something about it.

After removing an Amstel Light from Jeffrey’s built-in stainless steel refrigerator, I rejoined Arcon at the kitchen table. I was grateful that Arcon had sagely decided to reveal his plan and my role in it one step at a time. I was having enough trouble wrapping my head around step one.

“So, we drive to New York in my resurrected Miata, and then I somehow smuggle you to the top of the One World Trade Center building. Does that about sum it up?”

“You won’t have to smuggle me. I know how we can get past security.”

“You should feel relieved” Arcon said with his typical lack of diplomacy. “I’ll disguise myself as a gorgeous 19th century Art-Deco vase. You’ll carry me into the building in a case. When you open the case, the guards will be astonished by my beauty and originality and ask silly questions. I assume they’ll ask you why you came. You’ll tell them you’re a tourist heading for the top floor observatory to meet your girlfriend and give her the lovely heirloom I’m posing as.”

“You make it sound simple.”

Another question presented itself. Risking another reprisal I asked: “If you made it from the other side of the galaxy to a beach in Florida, why can’t you project yourself from here to the top of the World Trade Center?”

Arcon answered telepathically, as he always did, in my native language: Serbian. All of our conversations were held in my native dialect to reduce the odds of any eavesdroppers comprehending my end of our top secret discussions.

Arcon must have concluded that I needed to hear the answer to my query to gain my trust and commitment because he replied to my question calmly.

“The mother-ship dropped me five thousand feet above the ocean. I’m able to navigate and land safely in free-fall, but I can’t propel myself, as I’ve mentioned. It’s a trade off, Joseph. I don’t have room onboard for brains and propulsion.”

“So how will you get back to your ship?”

“I won’t. I’ll remain here on Earth, if there is an Earth left.”

I wondered briefly if that meant Arcon had more adventures in store for me, if we survived. Then, I remembered my latest novel and its sad status as distressingly past due. And then, I imagined my editor calling me to announce that she had finally lost patience with me and the book was cancelled.

Arcon seemed to sense my utter despair. “Why don’t you join me in the garage and watch me bring your old car back to life. Does she have a name?”

“Mathilde. She reminds me of a French woman I once knew with sunrise golden hair and intense blue eyes. I still have one of her paintings.”

“Then come along, Joseph. Let’s breathe new life into your lost love. I’m confident it will make you feel much better. 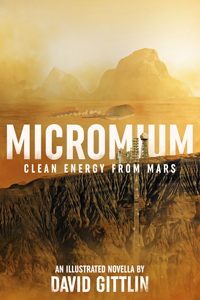